Climbing Ben Macdui in the Autumn period felt like I was snow shoeing my way through the Antarctic!

The snow element of Ben Macdui was something new for us, we have never climbed a mountain in these weather conditions before. This made it a challenge and gave us new sites to explore and photograph.

The mountain is located in Cairngorms National Park, which in itself is one of the most picturesque places to visit and hike in Scotland. It hosts many of the UK’s highest mountains, alongside lakes, forests and waterfalls. There are campsites, caravan parks and a ski resort throughout the national park. There are also some people hiking and wild camping, this isn’t frowned upon too much in Scotland or around the Cairngorms at all. Infact halfway up the mountain to the Macdui summit we came across a tent pitched up in the middle of a snowy landscape, that looked like a scene North of the wall. 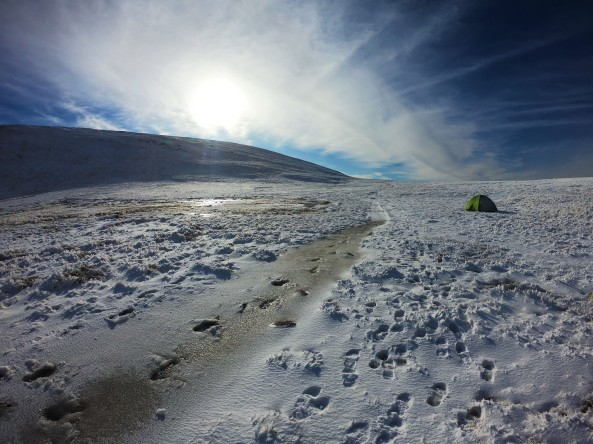 We parked our Bongo the night before the climb in Cairngorm Mountain carpark, it costs £2 and you pay at any point during the day over at the café. There are toilets, gift shops, a bistro and café available between approx 9 and 4 (season dependent, check website). This park is also a ski park for the nearby Cairngorm Mountain during the ski season.

As Scotland seem to have different school holidays to England, we found that there were often limited tourists in places like here. In fact, we arrived at an empty carpark the night before and were still the only car park until around 9am. When we came back from our walk the carpark was half full. 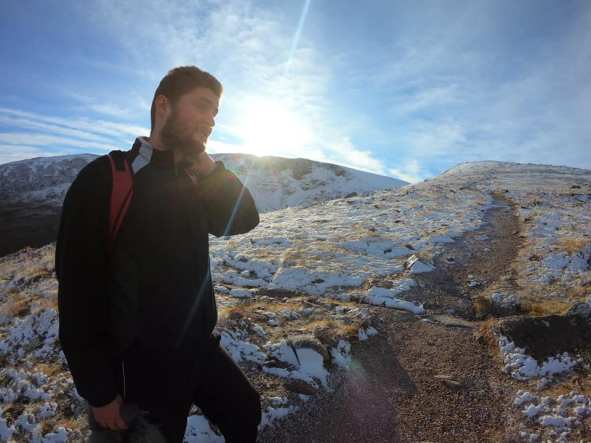 We set off at around 9:20 am and it took us 6 hours for the climb and then to descend. The temperature was 2 degrees when we left so we put on lots of layers and took extra tops to change into, just in case we got wet from sweat… Yum. We also carried Haribo, water, bananas, Nutella and a baguette for energy (I know, I know, probably not the best kinds of energy but it sufficed.. and it’s our school holiday we can eat what we want right?)

From the bottom of the mountain we could see the snow at the top but we didn’t realise just how much snow and ice we were going to come into contact with on the way up. It wasn’t snowing when we walked but after an hour of walking we came across a thin blanket of snow. This blanket became thicker with each step we took until we were walking through 6-7 inches of snow and ice.

The smaller lakes we came across on our way up had frozen over and there was a beautiful glistening from the top of them as the sun glared over. 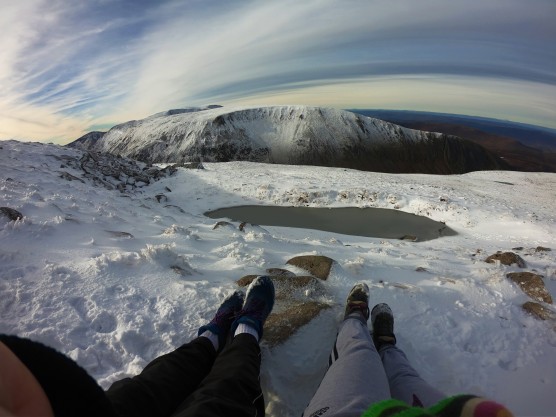 A little different to the views we saw when we climbed Carrantuohill (Ireland’s highest Peak) during our previous October half term when we embarked on our Irish road trip.

Around 20 minutes to the summit the ground became rapidly icier, this part of the climb also has many rocks that your would usually step up onto. Due to the ice we had to really take our time with each step onto the rocks. Ideally we should have taken walking sticks to support us with the climb- the majority of people we walked past had remembered to take walking sticks.

Something you need to look out for when climbing Mt Macdui in the snow are the streams of water that sometimes run underneath. They are not very deep but if you step onto them and break through the ice you will get rather wet and the rest of the walk would be quite uncomfortable in the cold. You notice the water as the snow becomes less soft and more icy or crunchy under your feet.

Safety tips for Mt Macdui in the winter

We followed a large group up the mountain and had a couple of smaller groups following us, there were not many people at all climbing on this day. This gave a sense of solitude and peacefulness, like we had found our own space that we could explore. There had been enough early walkers to start a footprint trail for us to follow. The trail continued pretty much all the way to the top of the summit, with occasional path strayers from the original footprint trail.

An hour before the summit you will find the cairns (piles of stones a couple of meters apart) which are lined along a large curved hill, which reminded me of a stegosaurus. Once you get to these you just follow them until you get to the summit. 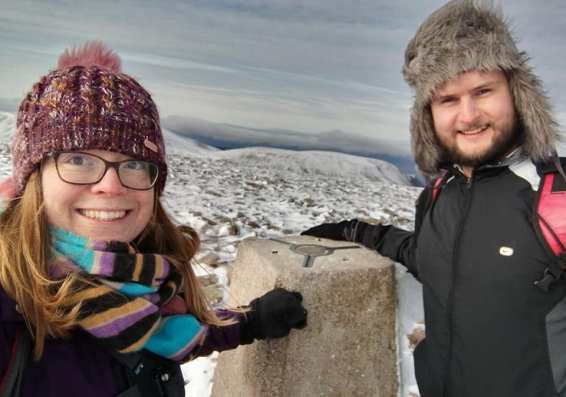 We made it! You feel such a sense of achievement once you make it to the top. Then you realise you need to also walk back down! However we found this much quicker, around 3.5 hours to walk up and 2.5 hours to descend. When you get to the bottom you could go for a coffee or, I recommend, the hot chocolate in the Cairngorms mountain café. Then you have done it! The second highest mountain in the UK… Now Mount Everest anyone?!